Episode 12: Conscience of the King

Although profoundly illogical in many ways, The Conscience of the King remains a great example of why we love original Star Trek. At it’s best, ST:TOS is both great science fiction and good story telling in general. With belief firmly suspended, we see one man obsessed with revenge, another cursed by his past sins, and a daughter driven to madness to protect her father from harm. This episode doesn’t just quote Shakespeare, it brings some of his most tragic concepts emotionally to life. Add in some groovy 60s lounge music and a classically twisted Kirk romance, and you’ve got one of our favorite episodes so far.

Can you tell Hamlet from Macbeth? Have you ever drank poisoned milk? Do you know what Double Red Alert means? Let us know your thoughts in the comments or send us an email at StarTrekQuest@gmail.com.

We just read this post over at TrekNews, one of the TrekQuesters’ favorite Star Trek blogs. Whether you’re planning to vote Red or Blue this November, it’s great to see the President of the United States giving a Vulcan salute while hugging our favorite communications officer. 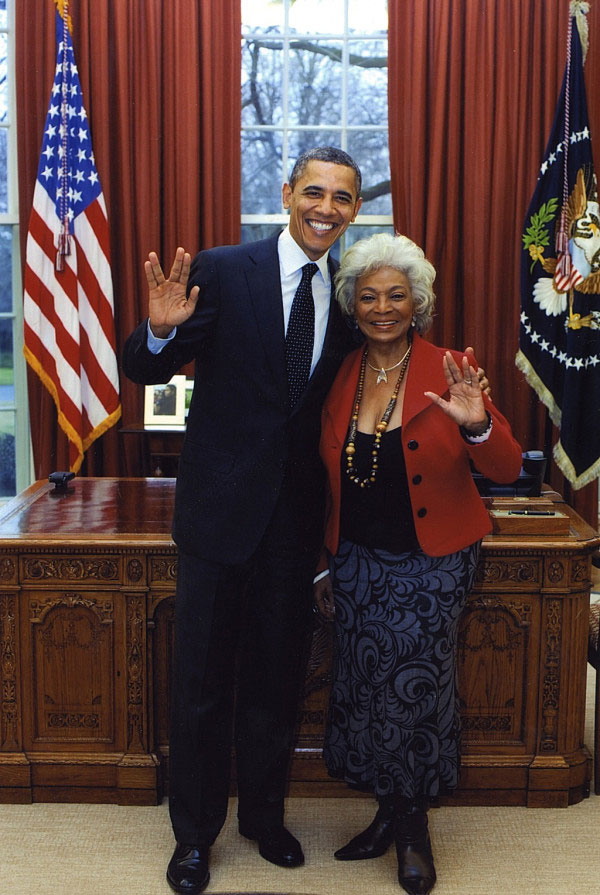 According to the article, Obama told Nichelle Nichols during their White House meeting that he is not only a big Star Trek fan, but that he used to have a huge crush on her. We wonder what Obama’s hotness ratings would have been this week’s episode? Does he prefer her original gold mini-dress, or the more familiar red version?

You can view the full article here:

After a brief hiatus due to travel, work, and moving, the TrekQuesters are back this week to discuss the episode that originally introduced America to Star Trek: The Man Trap. The first Star Trek episode ever broadcast, The Man Trap features a hairy, suction cup-laden, shape-shifting creature that wreaks havoc with the minds (and hearts) of the Enterprise crew.

There’s a whole lotta lovin’ in this show, folks. Bones loves Nancy. Crater loves Nancy. Green loves a galactic go-go dancer. Uhura gives some love to Spock, then gets some back from a Swahili-speaking crewman. Rand gets love, or at least attention, from Green, a pink plant, and a gaggle of demeaning crewmen, and gives some love to Sulu by bringing him his dinner. It seems the only person to get absolutely no love in this episode is Kirk. Strange, huh?

This episode provides also some intriguing insights into the supporting characters of the show, informing us that McCoy, AKA Bones, is also AKA “Plum,” that Uhura is a self-described “illogical woman,” and that Sulu loves plants, particularly the five-fingered variety.

But at it’s core, this episode is about loneliness and desperation — a much more serious episode than most of the others we’ve seen so far. There are still a few humorous/ridiculous moments, of course, but as a whole The Man Trap is a darker form of Star Trek, even somewhat sad, and it left the TrekQuesters looking forward to some comic relief in the coming weeks.

Could you suck 40 teaspoons of salt? Have you ever visited Wrigley’s Pleasure Planet? Would Kirk call your ex-girlfriends “handsome”? Let us know your thoughts in the comments or send us an email at StarTrekQuest@gmail.com.

For our second episode, we review the first Star Trek show filmed after the series was given the green light: “The Corbomite Maneuver.”

This time it’s not chess, but poker, as Captain Kirk bluffs his way through encounters with a spinning cube, a gargantuan sphere, and five blinking Christmas lights (at least that’s what the scout ship looked like on Dad’s VHS edition).

Bones, Uhura, and Yoeman Rand all make their first appearances aboard the Enterprise in this episode, and Sulu takes his familiar seat at the helm. Sitting next to him is a rather annoying Mr. Bailey, who fortunately only graces the Star Trek screen this once and then is banished to give the cackling space-baby Balok some companionship. Fascinating, indeed.

This episode sees Kirk battle wits with both McCoy (who, in case you didn’t know, was NEVER a moon shuttle conductor) and Spock (who gives Kirk his lamest advice advice ever).

Between losing his shirt, being threatened by a puppet, eating green leaves, and boozing it up (twice), this show is quite a ride for the stalwart Captain of the Enterprise.

Do you dig on beehive hairdos? Do you walk around your workplace with your shirt off? Are you afraid of an alien-baby with crooked teeth and a hideous laugh? Tell us about it in the comments or send us an email at StarTrekQuest@gmail.com.